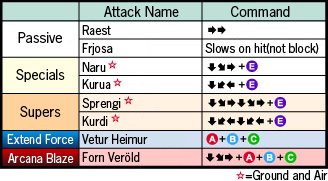 There was once a penguin that traveled around the world for many years. In time, the experiences that it had from its travels made it powerful enough to become a higher being. Even now, Almacia enjoys traveling around the world with Zenia.

Frjosa - When a charged E move hits your opponent they will fly off much slower than usual, allowing you to follow up before they go flying, giving you better combo options. This is somewhat similar to the Water Arcana's Cadus, however unlike Cadus the effects will not come out on block.

Raest - While using the Ice Arcana, your forward step (66) changes. When you step, there will be sheets of ice under your character that will allow you to do glide across the floor like a 6D, but you maintain the properties of a normal forward step. While this is deftinately better for movement than a normal step, short dashes that you would see in pressure and combos are slightly weaker as this dash has acceleration.

Vetur Heimur - During EF all of your normals will freeze the opponent like Firooza. As a result, you can do some pretty interesting combos with this. Also, Naru and Kurua have buffed properties during this time.

E
Sends and icicle out in front. Useable in the air. You can charge the move by holding the E button down. When charged its icicle is much larger and will wallslam the opponent on hit (same hitstun effect as Frjosa in how it can be followed up). During EF this move will always start out fully charged.

This is a very nice zoning move for controlling horizontal space both in the air and on the ground, if you get out some fully charged ones you can work in some strong chip damage too.

E
This will send out a snowflake diagonally downward. Usable in the air. During EF you will send two of them out at once. Limited use as okizeme, and mostly used as a fullscreen zoning tool.

E
Causes an explosion of ice around you. You can use this move as a combo ender, but it is also great as a reversal. The start up of this move is 8 frames and it's fully invincible during it. It will also wall slam on hit. Much like Fire's Gouten Shou, the damage changes depending on how you hit the opponent with this. The closer you are to your opponent, the more damage Sprengi will do.

E
This is the super version of Kurua. It will send out many snowflakes to assault the opponent. You can use this in the air. The attack range of this move is so big you could say that it attacks the whole screen (except for right below you if you are in the air).

Forn Veröld - Almacia's Blaze sends out a giant wave of ice from one side of the screen to the other, much like Kula Diamond's MAX version of Diamond Edge. This will guard crush if the opponent tries to block it in the air. That, combined with the multiple hits, make it essentially air unblockable. You usually don't get that much damage off of it but between the fast startup and how hard it is to avoid, it's actually quite practical to use.

Ice doesn't really have a single strong point but rather has a variety of useful things. This also means that it may not be easy to decide if you want to use it, here's the rundown.