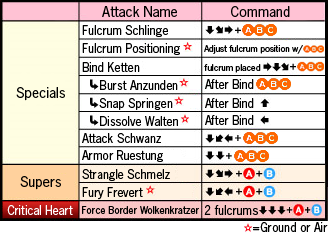 Some people like crazy girls. Scharl is another new addition AH3. She is an extremely effective spacing character to help offset her low life.

1 - Homing Approach
Scharl's main weapon when homing is J6C. It has amazing reach, does not have scharl's own hitbox in it and is not clashable. It's a great move for controlling a huge amount of area in front of you as you approach. While homing towards your opponent, throw it out a little early as it is on the slower side. You can easily pick up hits with a homing cancel too.

2 - Neutral Spacing
J6C again, is amazing. Just whip it out. While moving backwards or straight up into the air, try to hit with the tip of the move as much as possible. 5C is also a great move on the ground. It is similar to J6C in its reach and properties. You can cancel it straight into arcana moves to help with hit confirms or continue your pressure if they blocked. You can also cancel into Fulcrum to reduce your recovery and add some fulcrum points to work with on block. On hit you can cancel it 236AB for quick damage. 5C hits two times so its quite easy to do this. If your opponent is opting to come in from an angle above 5C or j.6C, you can use 5B if they're floating above and in front of you, or 2B if they're floating directly above you or threatening to cross up. In the air you can use j.6B which is an air version of 5B.

3 - Hit Confirms
JA is the fastest move that Scharl has and is vital for many air-to-air and rejump confirms. Off random hits confirm straight into JB > JE for the knockdown. You can also use JA to keep your opponents off you in case they get too close of chains to be effective. You should do 2 or 3 in a row just in case the JA clashes with an attack.

4 - Defense
Don't let the speed of her 2A fool you, it is actually good for poking out. Scharl's hand has clash on start up before the chain comes out. The chain still maintains its unclashable properties. So you can clash attacks with the startup and jut let the chain stuff them as the attack progress. So you only push the button once instead of try to clash again. You could also something similar 2A > 5A. While a legitimate tactic, this is still very risky, and Scharl's stamina does not allow for many mistakes. If you are confident in your timing with this, use it. But otherwise you will need to rely on GCs and arcana specials. As for projectiles, all of Scharl's chain normals swat projectiles easily.

Instead of giving Scharl more stamina. Most players choose to make Scharl better at what she is good at. Its smart to help make Scharl's confirms lead into more damage and make it harder for enemies to get in.

Plant
Plant give Scharl some menacing pressure. You can use vines from a safe distance and use the plus frames to stack 5 or 2C on before your opponent can recover. They can't clash any of these moves and its dangerous to jump would within Scharl's effective range. Plant gives you great damage of long to mid-range confirms and its easy to end combos with the vine super. The only problem is that Scharl's stamina is bad enough as it is. You could be taken out in one combo and a mix up and the regeneration from plant do not help now.

Earth
Earth will give you a little bit more stamina to work with. Rock can also help you turn long range confirms into huge damage with earth punch and super earth punch.

Wind
Wind gives Scharl more mobility to help you space. Winds projectiles can help cause more problems for your opponent when trying to get in on Scharl. Wind's push block gives Scharl a more reliable option for defense too. Just like with Plant, you need to be on your game with Wind. Your stamina will literally be gone with the wind if you let your opponent get in on you and rough you up.

That 2[E] is max charged

With the Wind arcana, you can connect a jump cancelled JE to something else with a NH for no meter. You get around 10,000 damage with this combo if you increase Falx's (236236E) damage

You can use the wind arcana's 2D to scoop the opponent up from an air throw, before they hit the ground. It is pretty hard to get the third jump cancel into JBC if you are in the corner, but even if you are not, you still need to play it by ear to see when you should end the combo

That 2[E] is max charged 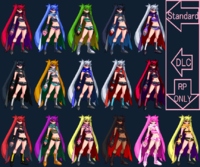