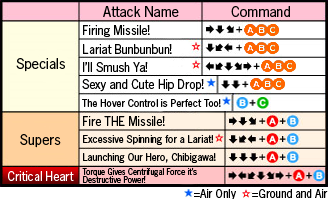 You may not expect it from her size, but Catherine is extremely mobile and an effective zoning and trap character. Not only does she pack a punch, but she can keep her opponents in the the corner with scary pressure tools and normals. She also has some of the best projectiles in the game. Players that would like to play Cathy are looking for a strong "Rock Paper Scissors" character that is solid all around.

1 - Homing Approach
If you are above your opponent, JC. JC's range is huge and is a big cross up move. The start up is slow but the duration is good enough that you can just cover them with it as you Neutral Homing towards them. If you're around your opponents head while they are grounded, JC can easily hit cross up. On hit, combo it straight into 5A and the rest of your combo.

2 - Neutral Spacing
Not only can Catherine be aggressive, but she is also great at zoning. You can use her A and B missiles to control the air in front of you with easy. Since you have free homing in Arcana Heart 3, there are a lot of times that your opponent will want to approach you from the air. These missile can make it very difficult for people to just shut down careless homing attempts. When they are further out 6C and 3C, her "tiger shots" are great for preventing halfhearted homing attempts or charging of any kind. They are even better when you are in EF. When you combine all of this with Chibigawa, whom constantly tracks your opponents from the ground, it becomes extremely difficult for your opponent to approach you from "conventional" angles.

3 - Hit Confirms
JA when in the air is relatively strong and easy to combo off of. When low to the ground, its is easy to re jump into another JA for the rest of your combo. When high in the air, confirm straight into Lariat and super cancel it if you have the meter. If they block JA close the the ground, 5C is always a good choice for guard breaking them and re-jumping into a combo.

4 - Defense
Remember bad connection Zangiefs and their unbeatable lariats? Well its back. Even as big as Catherine is, she can use her lariat to get her out of many tight situations. Using Lariat right after a 4GC is very good for getting your opponent off of you. Not only does it have super armor for one hit, it evades lows and has a huge hitbox. If you make them block it, you can homing cancel it (if you have the extra bar) and push the offensive.

Arcana that go well with Cathy are usually ones that help support her movement and defense.

Wind
Wind is the most popular choice of arcana for Cathy. She gets a movement buff and Wind's negative health multiplier does not hurt her too much because of her high stamina. Wind's fast fall is very good for her combos and Scutum, the advancing guard, is useful for getting out of a mess. Wind also has another very important role for Cathy, counter-picking Tyr arcana counter-pick. Tyr's Limit Daluege is disastrous for Cathy, but you can use the advancing guard to push your opponent into their own cage. At very least, you can prevent taking massive damage off every cage match attempt. Winds projectiles only help her already good zoning game and Wind's super is good after a super lariat.

Evil
Evil is a strong choice for Cathy against any character that excels at exploiting her large hitbox for corner pressure (Scharl, Petra, Nazuna, etc.). Position Swap allows Cathy to escape corner pressure easily, as well as extend combos and do silly Chibigawa setups. Poison Cloud compliments Cathy's strong zoning potential, walling her from the front while she launches an A or B missile to cover the air. With Extend Force active, all of her normals inflict poison, including wrecking balls, vastly increasing damage. Unfortunately, Evil's teleports do not allow Cathy to escape from Tyr's Hell in a Cell. Cathy can combo into Evil's powerful but risky Arcana Blaze, resulting in up to 18,000 damage. It's always escapable, though, so be careful while using it!

Blossom
Most of Cathy's problems as a character stem from her size, such as unavoidable setups and infinite combos specific to her. If your opponent knows one of the (many) infinites against Cathy, your best (only) option is to burst. And what better Arcana for bursting than Flower? Other than lotsa bursts, you get helpful tools for Cathy's already strong oki, and a fun Farmville simulator that grants you meter or armor or health or whatever. Nobody uses those anyways.

Ice
Ice is a great option for its Extend Force properties. Freeze temporary disables pushback from attacks, allowing Cathy's 4C and 1C drills to go to town on opponents, easily reaching 10,000 damage without touching the Arcana Gauge. Aside from Extend Force, both of Ice's supers can be used for a little (very little) extra damage at the end of combos. Snowflake is good to add to corner pressure, and icicle is a faster projectile than wrecking balls. However, using Ice is an all-in offensive option for Cathy. She's big and easy to hit, and frequent use of Ice's Extend Force leaves her unable to burst. If you do end up using burst, you're giving up Icedrill for at least the rest of the round, leaving you wondering why you picked the Arcana in the first place.

Sin
Sin is the best Arcana to choose if you want to augment Cathy's zoning game. Setting up Ambush traps between missiles and Wrecking Ball projectiles add to Cathy's defensive game, and the Tears super can cover the area in front and above Cathy where her normal projectiles fail to hit. The combo of all four Sin balls from Tears and one Wrecking Ball is about 8,000 damage, which is extremely high considering how low-risk the Arcana is. The Arcana Blaze is situationally useful, and the Extend Force activation attributes are average. It's a very solid choice especially against characters who have trouble dealing with heavy zoning.

Catherine may be big, but she has a ton of options and great rushdown in the corner.

Options off of j.C
j.C can be a very good tool to cross-up the opponent. Note that you might have to get used to the spacing trying to cross-up with Cathy as she is much better than everyone else. when you cross-up with this, you could land then do 2A to start a combo. You might have to go into Extend Force to add more stun to the opponent and speed up Cathy's falling speed just in case you crossed-up too high.

Options off of j.E
Cathy's foot jet move can be used for cross-ups as well. I will say that it is easier to get this hit to cross-up than j.C due to it being much faster and a good amount of range. Obviously this move is great as a combos ender but it has other uses as well. Opponents not expecting to get hit by a stand-alone cross-up of this puts you at a great advantage. When this happens they will most likely not be able to recover in time causing a knockdown. This will give you time to activate the mini-Terry super. Now you have a pressure set-up. From here you can IAD over the opponent with the option to cross-up with another j.E or j.C. You can also IAD over opponent and just start attacking when you land. Now you have the opponent dealing with you on side and mini-Terry on the other. This is great for chip damage if opponent doesn't get caught in a hit somewhere.

Unblockable Setup
This can be done from either Cathy's 4/6A+D or a j.E cross-up where opponent doesn't tech. Once opponent is on the ground, get close as fast as possible. Once there, summon mini-Terry immediately. Then fire a C version bomb(623+C). If your spacing is correct the bomb should land right behind the downed opponent. This creates an unblockable situation as the explosion from the bomb will most likely hit the opponent before mini-Terry does. If you fire the bomb a little late the opponent could get up and block. Firing the bomb in this situation then Extend Force canceling would allow you to fully charge an 5E and crush the opponent guard.

works with any Sexy & Cute Hip Drop. You can tiger knee it with 228.

Opponent must be in the corner, Cathy can be anywhere else

This works from anywhere on screen