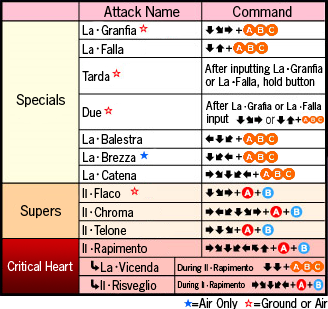 Players that choose Clarice are looking for a mobile character that possesses good reach and quick normals. In exchange for these Clarice has very poor stamina, but she can easily steal momentum and her opponent's health away very quickly.

2 - Neutral Spacing
As you may suspect, the La・Granfia series is extremely important to Clarice's neutral game, but they can also be her greatest enemy. She can be very scary to approach due to the range of these attacks, or she can whiff them all day and eat a 12k combo. Learning the range of these specials and when to throw them out safely is required knowledge to play this character. At certain ranges it is far too risky to rely on them, which is when Clarice takes to the air and zones her opponent out using her strong air movement and attacks.

3 - Hit Confirms
JA is used for many air to air confirms, it's quick speed lets your position yourself correctly before having to chain into the rest of your combo. Long range hits off La・Granfia are easily combo-able off a homing cancel.

4 - Defense
Clarice does not have a DP, dodge, or flash kick, but she does have 4C. 4C comes out in 1F, making it the fastest command normal in the game. You can use it to win clash battles and force your way out blockstrings. Combined with EFCs for easy combos, this becomes a deadly tool that your opponents will have to adjust to. Learning how to use this is "mission no. 1" of any Clarice player. All of your A moves can reflect projectiles, so Clarice generally has no problem against them.

Your selection in arcana will more or less determine your play style with Clarice.

Wind
Wind is a very popular choice for Clarice. The wind arcana can support your hit confirms and increase your damage. It makes Clarice even more agile than she already is, but you risk dying in only two or 3 combos. Wind's advancing guard is also nice for players that aren't used to using 4C. Skris is also useful as a zoning tool as you space with La・Granfia, throw one out whenever you have a free moment. Wind is a good selection for players that love to stay on the offensive.

Earth
The Earth arcana is great for people that want to use Clarice and improve her defense and health. The knock down off Earth's Kaichimon Mekkijin (Foot), all helps Clarice gain safe access to Il・Chroma. Earth is a good selection for players that want to play more defensively.

Love
Love is a strong arcana choice for most characters, and Clarice is no exception. Love balls do a good job of making her unsafe moves safer, the ability to float adds another dimension to her already strong air movement options, and the lockdown that love beam provides sets her up to use her 421 series for fullscreen zoning. Also, the above average meter gain that love provides particularly helps a character like Clarice who heavily relies on homing cancels to convert her random hits to damage.

In the corner, you can connect JB without a homing cancel if you hit 236C raw

Same combo as above, but with Il・Rapimento activation

Your current position changes what version of Fearg Lorg you use.

Low confirm around the corner only

Only high in the air, like after a neutral grab