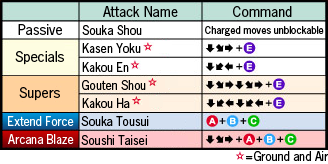 A wolf that lived an extremely long life in Shangri-La moved on to a higher plane of existence. It can now control flames at its own will and incinerate its opponents. Lang-Gong endlessly seeks further evolution of itself so it decided to accompany Mei-Fang, whom is also a newly created existence, to see through all of her possibilities.

Souka Shou - The fire arcana makes your charged E moves completely unblockable. The risk is high but you can expect big damage off of landing this. Unfortunately, people used to dealing with fire's shenanigans aren't likely to be caught by this.

Souka Tousui - During EF, your normal attacks will explode on contact with the opponent. You will cause 500 extra points of damage to your opponent whether they are being hit or blocking. Even though this would seem to substantially increase your damage potential, the explosions that will occur no matter what during EF pose some problems. Since they are basically extra hits to go with your normals, they end up forcing you to compromise your air combos for most characters since the extra hits will shorten the untechable time. Also, they cause the opponent to float on hit, so you won't be able to go about your ground combos as usual. Truly bringing out the damage of the Fire Arcana's EF really depends on what character you choose to go with it. You cannot just use any character and expect to do massive damage.

E
This move has you shoot a fireball which can also be used in the air. On the ground you shoot it diagonally upwards. In the air you shoot it diagonally downwards. The ground version is a little faster but this move is a great tool for character that don't fire projectiles in the first place. You actually cannot reflect this projectile, but you can still clash it. The untechable time after this is pretty long, so not to mention being able to follow it up easily after a random hit, there are also all sorts of silly combos that you can do.

E
Sends a spiraling blaze out in front of you. You can do this in the air as well. This will float a grounded opponent and the recovery is pretty good. You can usually pick up the hit on the ground with a normal attack to move into an air combo. This move can be charged as well. There are three different levels depending on how long the attack is delayed. Level 2 and 3 improve the damage, number of hits, and range of the move.

E
This move generates an explosion around your character. You can use this in the air. This move has some invincibility and is unclashable. This move does more damage the sooner you hit them with it.

E
This is the super version of Kakou En, of course you can do this in the air as well. The start up is a bit slow but it has almost no recovery and does great damage. You could use this for combos or pressure strings since the recovery and chip damage is so good.

Soushi Taisei - Lang-Gong appears from the corner behind your character and runs across the entire stage. This will hit the opponent repeatedly until Lang-Gong has disappeared into the other corner, so the damage actually depends on how far from the other corner you were before you activated this. It's not generally something you should actually try to set up, though.