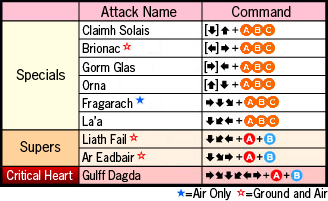 Next time, we make a neutral charge. Saki, like Heart is one of the easier characters to play with great mileage. She has a great set of normals and many tools for pressure, defense and mixups. She's a very solid character.

1 - Homing Approach
Does Saki's JA remind you of Heart's? Well good, remember that it is just as good. Note that it does not cancel it itself though. It is great when homing towards your opponent since it will hit above and below Saki. Another good tool is J2B. If you homing over your opponents head, the timing of the move makes it good for baiting anti airs and punishing right after.

2 - Neutral Spacing
J2C has a good hitbox and almost no recovery. You could use to be be more forceful in off a single jump jump or 7/8D. You don't want to be too predictable in your approach though, carelessness could lead into eating damage. 2A has a great hitbox and fast start up so you could use it off a step for more aggressive spacing. You should also get into the habit of using 5B on hit or block right after it. This is important because 5B is jump cancellable on block. This means that you can IAD into an overhead or Just cancel into 2C for the low. If they block the low you could cancel into Orna for an overhead after that. Another good tool is Brionac. The A version covers a decent amount of space and is slightly plus on block. You could use it to be more aggressive when spacing near your opponent. The C version has great reach and a great hitbox. You should time it with openings in your opponents neutral game to almost any response to Brionac. The C version has a lot of recovery and is minus on block though, so your usage needs to be systematic.

3 - Hit Confirms
For air-to-air JA hits, you can simply tie the hit up with JB and J4B. If you land a J2B, try to be able to confirm straight into Gorm Glas, or with as few 2As as possible. If you can you can follow up without having to use homing cancels or EF.

4 - Defense
Claimh Solais is not only great for anti air, but for reversals as well. You can use the A version to beat out a lot of jumps ins and cross ups as well. Oh hit you can link right into Liath Fail for more damage. People who know how Saki works will be trying hard to bait this. In those cases you can respond with 5A and 6C for the anti air and or combo confirm. If this gets blocked, use a HC to stay safe. If you don't have time to charge Claimh Solais, you can reversal with Liath Fail instead. Her 2A is also good so you do have the options of poking out with that as well. You also have a command roll. Its not recommended for general use, but it can help you escape the corner or a throw and punish with a corner combo in some situations. Just remember that you're going to be very unhappy if they guess right.

Saki has a wide range of Arcana to choose from. She doesn't really need EF for combos, so she can burn it on other things such as pressure, chip damage and burst. Many good choices give her extra damage off random confirms or help her with spacing/zoning as she has no innate projectiles.

Love
Love gives Saki a good good set of long range options to play with. You could use love balls to help give Saki some cover to force a close range with a greater degree of stability. You can also increase the damage of you combos by adding super love laser after a JE when facing away from the corner. This arcana is recommended to all Saki players from experts to beginners. Halo is similar to Love in this sense. Which one you choose is based on preference.

Thunder
Saki's own arcana is great for her. Thunder allows Saki to play at he best range with ease through the use of step and charge moves. You could also make use of Thunder's EF attributes to punish jump ins and respond with a flash kick. You can also use Thunder's lightning bolts to improve Saki's okizeme game after a knock down. The only problem is that Thunder doesn't help with her midscreen game. You'll still have to work a little bit to get in.

Time
Time gives more focus on mixups for Saki. She can use infinite light and Fragarach in the air to start up mixups with Causality and Freedom from Bondage. Gorm Glas also combos well with 6D. The speed boost from EF also makes Saki's strong rushdown even harder to block. Note that you'll still have some issues getting in, and Time's FG recovery time leaves room for only a few mistakes. When dealing with character that are most effective from mid to far range, its better to avoid Time.

Fire
Saki's OG arcana of choice. Fire can help turn a lot of Saki's hit confirms into big damage with EF. Besides that, you also get nice damage off fireballs into homing cancels and Kakou Ha combo enders. Air fireballs also provide good cover for your spacing game since they cannot be reflected. Fire's EF traits are good since saki's rush down is so already fierce. You can easily stack up a ton of chip damage with this, along with charge E unblockables.

Flower
The elimination of counter hits for Saki is a blessed thing for her. You can also burn your FG on burst for the most part. Multilayered Crimson Nirvana is also a good tool for pressure on knockdown and guard breaks. You can also use flower for hidden lameness. With your back against the wall, you could lay a couple of plants and lay in wake of your opponent in EF. If they don't come, just stay there and increase your AG. If they come, bail out with La'a into an EFC or just high jump as a low risk option. If you know they are gunning right at you, counter with a Claimh Solais and then combo into JE to blow them away from you. This of course, depends on you having a life lead until you have three bars. When down on life, use the meter you have on Multilayered Crimson Nirvana to increase damage off combos. When you're good on life, use Dream Flower or plant more regular flowers and continue to maintain your fortress.

If you don't know numpad notation, you should look it up first!

Basic Combos Without [6]4C And EFC

Saki's best combos use [6]4C and EFC. In fact, you might want to just skip this section and go straight to the bread-and-butters below! But sometimes you just don't have forward charge and don't have EFC either. That's where these basic combos are useful.

These combos are the most training-mode-time-efficient combos to learn. They deal high, often close-to-optimal damage. They always end with knockdown. They are generally universal and work regardless of character and screen position (unless otherwise noted). They are simplified somewhat so that you can learn a smaller # of combo routes.

The combos below are from the OLD Combos section. This section needs to be updated.

7745 dmg.
Easy, meterless target combo with Vine.
Against Fiona, omit the 5B after Vine.

10290 dmg.
Harder combo after Vine. If Vine hits the opponent at max range, then you need to 6HC/EFC it.

7398 dmg.
Ground EFC combo that can lead to a high+low unblockable with a plant seed in the corner.
If you start this combo near your own corner, end it with [4]6C (OTG) j214214E instead.
Delay the [2]8B until you see them bounce off the ground.
If you replace [2]8B with 5C [sjc], you are pushed farther back and you will get 2 seeds on the ground instead of 1. 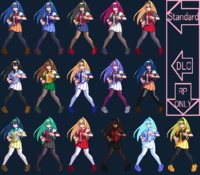