I put these strings under strategy/pressure as it is not advisable to use these as canned strings, but to give an idea to orb uses.

If the orb hits before 236B does, cancel 5C into 236B then release the orb after.
You can cancel all the hits from 236B except the last one with an EX or an Arc Drive.

(these are best in the corner, but you can space stuff like this midscreen too and put teh FEARINTHEM

Can condition the opponent into blocking low after jump-ins for fuzzy fun.

Leads to pretty much the maximum damage H-Aoko can deliver. Followed by a low-proration combo (66 2B 5B 5C 2C 3C etc) making it damaging.

"j.C, 66 j.AB" combos for a high damage 3-hit starter, and can condition the opponent into blocking high for a few hits then low with 2B... see fuzzy combos.

The options haven't changed from PS2, see the PS2 wiki and read the meltybread.com threads on Actress Again and Current Code .
Also check videos such as:

The "double j.B then orb pop" hits fuzzy on the second j.B and the orb provides hitstun till you land even without the airdash j.B.

The fourth hit, the second j.B is fuzzy here again. Extended approach from the third jump-in string above.

With an orb out, cover the charge or combo out of 4[c] overhead.

Example In the corner:

Carefully placed j.214A/B air orbs will fling the opponent upwards if you throw them into it. If you get a maximum range ground throw onto an air orb you will have enough time to superjump up and confirm them, even connect j.214C and continue on the ground. Just around or above Aoko's head height is ideal placement to work. Doesn't matter about charged orbs or not. Pretty sure all Aokos can do this.

These combos are examples of meterless, fullscreen carry with different knockdown options. Combining the dash link (4[C] 66 2A/2B/2C) with other BNBs gives aoko great opportunity to land high damage oki setups from any good starter.
There are many variations in whiffcancelling, the ones listed here (in my opintion) seem the most stable.
Note the combos don't use 5[C] before 4[C] midscreen. (Usually there is not enough gravity, but it will work in some combos with added gravity or in the corner)

Aoko can 2A > 2C or 2B > 2C into her ground loops from an airthrow, however it is not possible to pickup like this post-airthrow against these characters: (see character specific section too)

The jp video here shows ways to use the pickup and other options : http://www.nicovideo.jp/watch/sm20622328

The following basic confirms assume you already have air counterhit with a jumping normal and landed.(these work whatever happens)
note: Air CH from a normal (j.A etc) will not allow the falling opponent to be picked up with 2AC or 2BC.

The next advanced confirms assume you already have air counterhit with an orb and are grounded.
note: Air CH from an orb (popped or placed earlier) allows all your loop/pickup options, with good spacing of course. \(^.^)|

H-Aoko can pretty much play without needing to use meter in combos. However, metered combos are good for setups from airthrows, awkwards long distance confirm 2B/2C's into 214C or j214C and easier air counter-hit conversion than the loop. 214C Circuit Break kills your opponents meter on hit but doesn't nearly last long enough; you'll probably be spending the elsewhere.

Any airstring ending on superjC will allow you to combo to j214C, land and continue. Commonly with 5[C]4[C].
The cancel/link between 'j.C and j.214C' is tight, learning the heights that it will whiff at just takes time. j.BC > j.BC > j214C will work with decent delays between 2C > 5C > 3C and gravity taken into consideration.
Remember: only 3 groundbounces (4[C]'s) per combo, and only one '5A6AA 5[C]' will connect.

Circuit break combos
Note: 214C OTGs and launches with circuit break, so you can empty dash after 4[C] for example, and get closer than '214B xx 214C' will allow.

All of the midscreeen BnBs still work. Also:

In the corner, '4[C] empty 5A(w)6AA' 5/4[C]' also works. This section is divided between two corner loops and one optimal meter-building loop.

Corrner loop 2 with similar followups although only one ground bounce is used by this point: 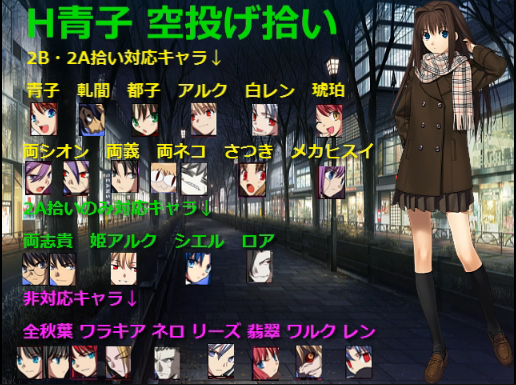 2B pickup works on :